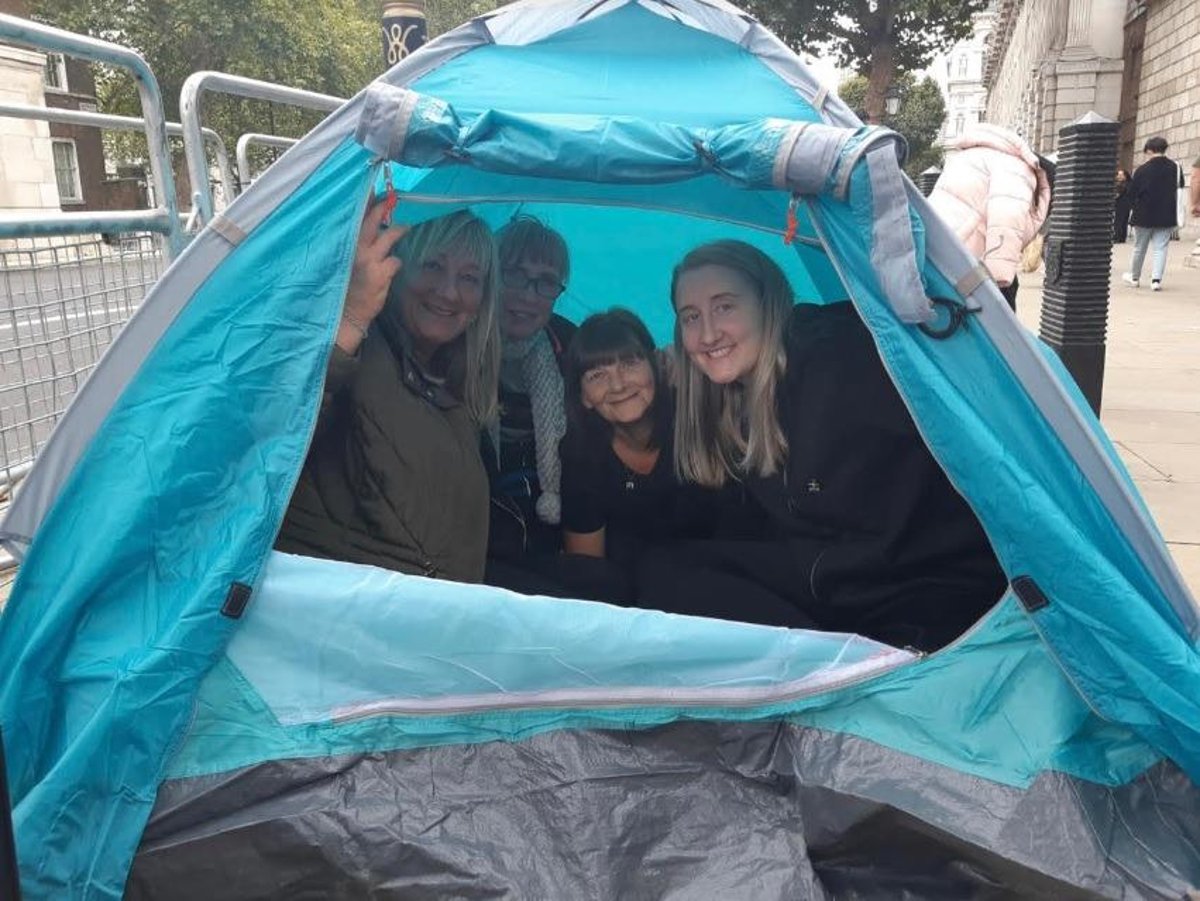 Elaine Harrison told the Ulster Star that she felt it was important that they honor the much-loved monarch in this way.

”We felt it was important to visit our late Majesty in state and attend a state funeral, as we did in 2002 for the Queen Mother,” Elaine explains.

”Our late queen dedicated her entire life to serving us, and she did so tremendously. It was very emotional, but it was an honor to pay our respects.”

Rachel Hamilton and her mum June Stout from Manor Park, Elaine Harrison and Sandra Whitfield. The devout group camped out for days, including a 14-hour queue to see the Queen lying in state to pay their respects

Speaking to the Ulster Star on Tuesday night, a dedicated group of locals, Rachel Hamilton and her mum June Stout from Manor Park, Elaine Harrison and Sandra Whitfield, were waiting for their flight home at the busy airport, having been away for a total of four days. pay respect to them.

”We were booked for Sunday but after watching the news we were worried we might miss the chance to see the Queen lie in state,” Elaine explains. ”So we changed our flight and arrived on Saturday night and went straight to the queue.

”We stood in line for 14 hours and met some amazing people. It meant a lot to us and it was worth the wait. The atmosphere at Westminster Hall was emotional, calm and very overwhelming.

John and Anna, 90-year-old pensioners, and their very own King Charles (their beloved pet dog) camped outside to pay their respects

”We’re actually just sitting at the airport waiting to go home, so we’ve been gone for a total of four days,” Elaine explains.

The parade yesterday (Monday 19 September) was very moving and a beautiful and fitting tribute to our beloved Queen.

The atmosphere was amazing, we camped outside the Queen’s Horse Guards where we met people from all over the world.

”One lady traveled from Minnesota, USA as well as two 90 year olds and their own King Charles, their beloved dog, who camped all night next to us who had previously been to the Queen’s Coronation.

“Their stories and determination kept all our spirits up through the night with true British grits and very welcome tea, coffee and blankets from the Salvation Army.”

A group of four local women were in London to pay their respects to the Queen, including lining the streets to watch the parade pass by on September 19.
A touching floral tribute for the Queen